Claude Puel considers himself “on a rescue mission” from Saint-Etienne, 16th and in the fight to stay in Ligue 1, he said in an interview with AFP, recalling that ASSE lacks “means “to recruit, but hopes to” build “with” quality young people “.

Claude Puel, can you take stock of your action since your arrival fifteen months ago?

“We have responsibilities when we are at ASSE. (When I arrived) I saw an interesting club, with a quality group but aging, that we had to open for the future. I tried to develop young people players. The economic model was no longer tenable after the club got heavily into debt to try to titillate opponents at the top of the table. “

What were your initiatives?

“We had to develop young people, like (Wesley) Fofana. Some appeared pro, bringing their freshness. This did not last, for lack of consistency and profession for some, of quality too. The departure of Fofana, cornerstone of our group, three days before the end of the last transfer window (in Leicester for more than 35 M EUR, Editor’s note), disturbed us and we could not return because it was not planned. “

“I took part in two mercatos. We were only able to sign Yvan Neyou or Yvann Maçon and nothing else. We are the 20th club in terms of transfer possibilities. This shows that the club was in great debt. It was also necessary to sell Franck Honorat or Vagner Dias, young people, simply to make up for deficits. It is a very worrying situation economically and sportingly because we could not recruit but also because we had not developed enough young people. There were a lot of things to sort out in the short term and since I arrived I consider myself on a mission, quite simply, to save the club. It is not a hackneyed word. And on top of that came this Covid pandemic which amplifies the problems of ASSE and all French clubs “.

Are there possibilities to change things in the transfer window by the end of January?

“We only invested 800,000 euros on two mercatos. No French club has done so little. I couldn’t do anything despite interesting and affordable profiles, for lack of means. We had to sell young people to ensure that we could simply be present in Ligue 1 and pay salaries. It must also be said that the (compensation for) transfers that we receive are spread out and will be used to cover the deficits. “

“The season will be difficult until the end”

How is the future of Saint-Etienne, current 16th in Ligue 1?

“We are building on something solid with quality young people. This is done at the expense of results. We cannot say, because Saint-Etienne is a great club, that it must finish 4th, 5th or 6th. It doesn’t happen like that. We need resources that we don’t have. Most teams are better equipped as decisive players than we are. What we are doing is not so bad. I am happy with the investment of the players even if it is not materialized on the points. The season will be difficult until the end. “

What is ASSE’s position on lowering wages?

“Nineteen players have left us, either sold or loaned. Our approach to reducing the payroll is virtuous. Otherwise, the club would hit the wall. And again, we did not go down as we would have liked and should have. This will be done by mutual agreement with the players. It will be up to the leaders to intervene. “

What are the consequences for ASSE of the absence of cash flow, between ticketing and TV rights?

“The broadcaster’s story is problematic because many clubs have invested according to the expected income from TV rights. With us, a lot of effort has been made to maintain a model that was no longer virtuous for ASSE and that would have had to balance with TV rights. For now, no one has the solution. There is no short and medium term forecast. We see it with Canal + who wants to take advantage of a situation. “ 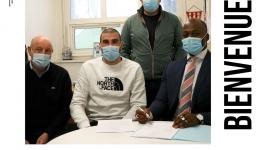 The National 3 club has just announced the recruitment …